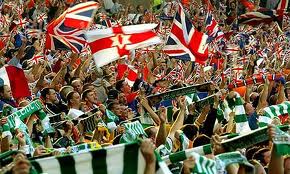 Amid speculation about the possible demise of their arch-rivals Rangers, it must have seemed strange for Glasgow Celtic’s chief executive Peter Lawwell to be fielding questions on whether his own club could survive without their Old Firm counterparts.
After all, surely any mishap befalling your oldest and bitterest foe can only be good news. Especially when that mishap takes the shape of a 10 point deduction and makes the small matter of your 43rd Scottish league title a mere formality.
“We’ll survive very well”, the Celtic chief executive responded. Adding with just a hint of schadenfreude, “We’re going to be in better shape than them if their problems cause greater difficulties.”
Lawwell’s reasoning was based on practical considerations, the level of Celtic’s debt for instance and the viability of Scottish football minus one of its two behemoths. But his answers won’t have reassured everybody. The last Scottish team outside of the Old Firm to win the title were Alex Ferguson’s Aberdeen in 1985. In a league rightly criticised for its lack of competiveness, switching from duopoly to a monopoly will leave a spectator sport about as interesting as its board game namesake.
Trouble down by the riverside
But let’s set aside the enthralling world of Scottish football for a minute. The issue of Rangers’ difficulties and their potential impact on Celtic highlight an important dynamic present in any rivalry: that both sides define themselves antithetically to the other.
‘Rivals’ is a Latin word in origin, derived from rivalis meaning ‘persons dwelling on opposite sides of the river’. The symmetry in this image of two rival camps across a river is quite apt. Both camps may think they have the best river bank, or the greenest grass, or whatever people squabbled about in Roman times. No doubt they hate each other, but what made them noteworthy and set them apart from the numerous other riverside encampments of olden times was the competition between the two. Like it or not - and the answer for anyone in Glasgow is bound to be not - to outside observers the animosity between Rangers and Celtic is viewed similarly. Like two sides of the same Old Firm coin it’s impossible to conceive of one without the other.
The good old days of the Cold War
The early 1990s saw the termination of one of the world’s greatest rivalries. Since 1945 Western democracies led by the United States and the communist states of the Eastern Bloc led by the Soviet Union hadn’t seen eye to eye on such trivialities as whether communism or capitalism was the best ideology to live by. Being a contest between two diametrically opposing worldviews encompassing the majority of the planet’s population, as opposed to say two football teams, the Cold War didn’t manifest itself in the same way as other rivalries.  Instead of a derby, both sides participated in a nuclear arms race. Bragging rights focused less on famous FA Cup victories and more on first moon-landings.
But despite having been concluded for over 20 years you can still find some of the victors lamenting its loss. George W Bush mused: “It was us versus them, and it was clear who ‘the them’ were.” And while it may be surprising to hear such a renowned peace-lover and intellectual express nostalgia for a state of heightened military tensions in a grammatically incorrect manner, Bush is not alone in his views. He’s not even alone among former US presidents.  Whilst in office in 1993 Clinton joked “Gosh I miss the Cold War” as conflicts in Somalia, Haiti and Bosnia brought home how unpredictable a post-Soviet world would be. Winning the Cold War had eradicated the Soviet Union, but left a void that needed to be filled and a question to be answered: who will be our rivals now?
No star-crossed lovers they
As successive details of Rangers’ worsening financial situation have been leaked to the press, Celtic choruses of “we’re having a party when Rangers die” have grown louder. These may be two football clubs alike in dignity, but they’re hardly a pair of star-crossed lovers. But if Celtic get there way and it ends in tragedy for Rangers, what then? Perhaps more than any other, the identities of these two clubs are counterbalanced; each one validates the other. And if you think nobody would miss the unsavoury scenes and sectarian songs that accompany Celtic and Rangers whenever they clash, just remember the former US presidents who pine for a day when the threat of nuclear war loomed over us all.
Posted by SBD at 04:22