I used to be apathetic, now I just can’t be arsed. 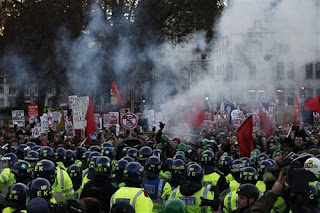 Received wisdom tells us mass protest died in the 80s, it gave it a good go, but came out second best. Since that time, young people have supposedly lived in a haze of apathy, there only engagement with the outside world being occasional voting on reality TV programmes. Most of us remained to be convinced by this lazy and slightly malicious stereotype, perhaps we used it in jest, perhaps when we were just out of student-hood ourselves. Well now the cat is well and truly out of the bag and the stereotype, sarcastic or not, is no longer tenable.
So what happened? Why the resurrection? And does this second coming herald a permanent change in the social conscience of young people or have we simply been witness to the fleeting visit of an anachronism?
Well to start with, a given, as is often best: protest didn't disappear between the Poll Tax demonstrations and last week’s furore over the planned increase to university tuition fees, it has always been there in the background, it just didn't captivate the national imagination in the way it is now doing again. The war for instance saw an estimated 750,000 march yet the subsequent invasion of , in spite of such voluminous and vociferous opposition, left the protest movement in a somewhat despondent state it found difficult to shake off.

The protesters of today however, are of too young an age to carry the defeatist baggage of the anti-war movement.  For most it’s their first protest and as such their conviction is clear and their confidence high; still in their teens and putting the world to rights. And if it changes nothing else, which last Thursday’s vote made it like more likely that it won’t, it will at least change popular perception of young people in this country. Although the transition from lazy and apathetic to a disrespectful mob is a somewhat dubious upgrade.


Whilst on this topic it does seem that the achievements of young people are consistently undermined from some sections of the media. Organised 50,000 to march on ? Well then you’re guilty of rabble rousing. Achieved the best ever exam results? Well they must be getting easier. That kind of thing.


It wasn’t just of the age of the protesters that distinguishes recent demonstrations from those in the past, modern technology also played a critical role in the events of late November and early December. Twitter and Facebook became enlisting tools, the call to arms and preferred medium of canvassing for support took place online, as did the organisation.
Tweets and status updates, often maligned as pointless and inane by a generation not comfortable with social media, took on a function even their most ardent supporters must have raised an eyebrow to. But whilst much has been made of students’ apparent advantage over the authorities in the technological domain, it was and isn’t a one way street. Police film protesters in the hope that they can identify and prosecute troublemakers at a later date. Although such technology is nothing if not democratic and protesters are increasingly filming police exposing breaches of regulation and, as the linked video shows, outright acts of illegality.


New language has been necessary to describe this new form of protest: activists “tweet” and police “kettle” and the discrepancy in ages between the respective actors gives this relationship an intriguing dynamic.
However don’t be fooled. Young people and modern technology doesn’t equal protest, that equation’s most crucial ingredient is a cause. The makeup of protesters and manner in which they have organised themselves may be different, but the reason people protest is the same and in the long quiet days where nobody shouted and nothing burned, was there actually anything to shout about?
Posted by SBD at 12:48